This article is copyrighted by Walkabout Health Products LLC, 2019

What makes it multi-functional? Vitamin K2 MK-4 is an “Activator” which 17 different Vitamin K Dependent Proteins (VKDP) (14) depend upon to become “active” in the body.

Vitamin K is a fat-soluble vitamin and has many members in its family.

Vitamin K1: made from plants and is mainly involved in coagulation

Vitamin K2 MK-4: the most important of the K2 vitamins (MK = menaquinone) from animal sourced foods

K3: (menadione), water soluble and artificial, banned by FDA for use in humans because of high toxicity

Are the K Vitamins Interchangeable?

For thousands of years our ancestors had their K2 needs met by eating animal sourced foods rich in vitamin K2 MK-4.

Vitamin K2 MK-4, found in food, is quickly absorbed in the body and is stored in the brain, salivary glands, testes, sternum, face, pancreas, eyes, kidneys, bones, arteries and veins (15), where it is utilized for activating vitamin K dependent proteins (VKDP) and possibly for other, as yet, unidentified functions.

Many studies support a theory that the main source of MK-4 is made from K1, green leafy vegetables or vegetable oils, but the body absorbs small amounts (less than 10%) of K1 from food (16, 17), and our needs are greater.

Conversion of K1 to MK-4 in animals that have the digestive systems for it, such as cows, adapted to eating grasses all day long have the ability to extract all their nutrients from that food source. Humans, higher up on the food chain, have a digestive system adapted to getting our K needs met predominantly from those grass eating animals. (17, 18)

Another theory is that we can meet all our MK-4 needs from bacterial synthesis in the gut, but this also has been disproven. Our guts can make short and long chain MK’s (for their own use), but they do not produce MK-4. (19, 20)

MK-4 is the only form of MK not made by bacteria.

Some suggest a theory of conversion from K1, MK-7 or other MK’s to MK-4 via the enzyme UBIAD1, which removes the side chains of the K vitamins producing menadione (K3). K3 travels to the liver where it is detoxified by the liver and is somehow transported in the blood or lymph by an unexplained carrier to tissues where an unknown enzyme(s) adds side chains back to K3 producing vitamin K2 MK-4. (21)

If menadione (K3) is used in this process what happens if K3 exceeds the rate at which the enzyme can add back the side chains. Does the excess K3 cause toxicity and oxidative stress? The research is unclear.

It is known that menadione causes disruption or rupture of red blood cells, toxic reactions in liver cells, depletion of glutathione, weakens the immune system and can cause allergic reactions. (22) The potential for these negative effects is why FDA banned K3 for human use.

A Substance that is Not Adequately Provided for in Modern Nutrition ~ Dr. Weston A. Price

Dr. Weston Price in the 1930’s traveled the world studying different cultures to see how they maintained their health and vitality. Consistently he found that the foods they ate had 4xs the water-soluble vitamins and 10xs the fat- soluble vitamins than the standard diet of his time.

When these people replaced their traditional diets with white sugar, white flour, and processed foods they experienced what Dr. Price called “loss of immunity” or physical degeneration, negatively impacting their health and the health of their children.

Dr. Price wrote that people of the past obtained a “substance that is not adequately provided for in modern nutrition.” (23) He isolated this nutrient and called it Activator X. Price was able to make a concentrate of Activator X from butter, which he called butter oil. (23)

Dr. Price did not find a culture that was vegetarian, in fact, some cultures had no, or very limited access to vegetables. Our ancestors obtained their K2 MK-4 from animal sourced foods. (23)

Evolution at Work: Babies give Vitamin K2 MK-4 a Big Thumbs Up!

A good example of the body’s preference for MK-4 starts in the womb.
A Japanese study divided pregnant women into two groups, one eating a normal diet and one eating a diet high in natto (the only natural form of MK- 7). Even though K1, MK-4, MK-6 and MK-7 were found in the placenta, MK-6 and MK-7 were blocked from entering the fetus. K1 was found in the amniotic fluid, merconium and umbilical cord.

K2 MK-4 plays a critical role in fetal development, for the brain, vital to proper skull, facial, dentin formation and for mid-face development. (23) 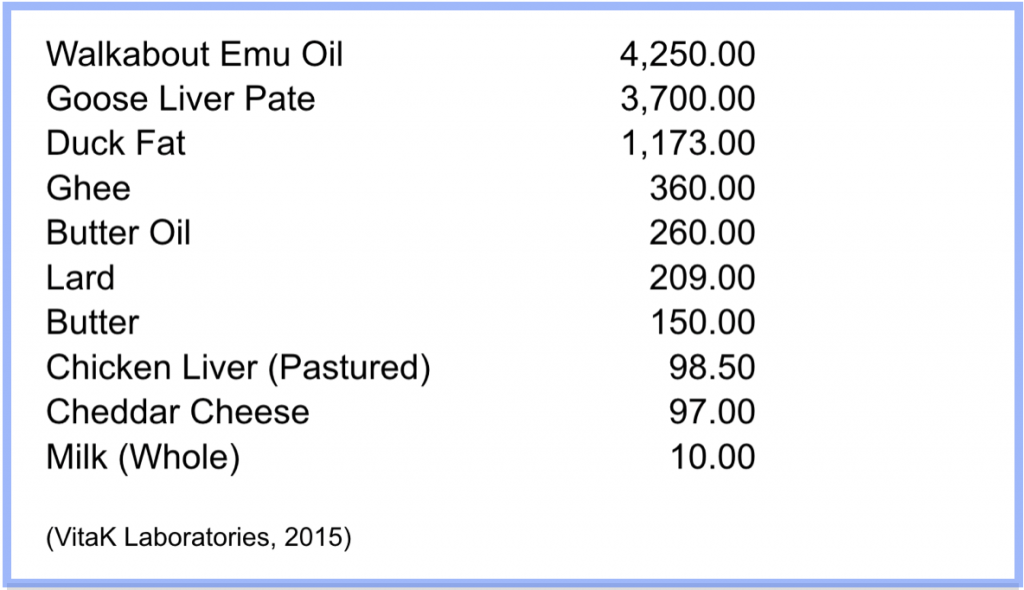 Walkabout Emu Oil is an ancestral food and medicine of the indigenous Australians. Emu oil is a unique synergy of nutrients and the life sustaining fat of the bird.

The beneficial properties have long been known to the Aborigines as a remedy to reduce pain and inflammation with records dating from 1847. (29) The emu is so revered by them that it is part of their mythology.

Not all emu oils have the same characteristics or benefits. Research starting in the 1990’s show the genotype of the bird, correct feed and a traditional refining method is of the utmost importance. Walkabout Emu Oil is Australia’s highest quality emu oil.

Two American emu oils were tested and no K2 MK-4 was detected.

There are hundreds of actions and benefits of VKDPs, creating a cascade of reactions that are far reaching in the body, ie. moving calcium to where it should be in the body, like teeth and bones. And pulling calcium from where it is not wanted like heart arteries and veins. (30)

MK-4 is the most abundant vitamin K in the brain and involved in many cellular processes including cell growth, survival and apoptosis.

In regards to MS a recent study showed that people with MS have 3-fold less vitamin K2 MK-4 than the average person. (33)

In mouse studies VKDPs increased oligodendrocyte numbers, stimulated myelination as well as stimulating remyelination after toxic injury and decreased demyelination. It is involved in gene regulation that push the glial cell developmental pathway in a promyelinating direction. And down regulated multiple genes involved in the development of MS. (34 )

The vitamin K2 that we need to nourish our brains and bodies is MK-4 from animal sourced foods, just like our ancestors. The highest whole food source of this essential nutrient is Walkabout emu oil and we invite you to make it part of your daily nutrition.

Nutrition that comes from nature works better and is utilized more easily than anything made by man or science.

About the Author: Walkabout Health Products